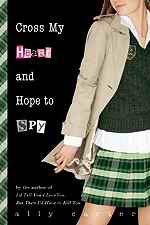 I just finished reading Ally Carter's Gallagher Girls Book 1 (I'd Tell You I Love You But Then I'd Have to Kill You) and 2 (Cross my Heart and Hope to Spy). I became interested in the books when I saw a newsletter that the third book (Don't Judge A Girl By Her Cover) is now out.

The book is about 15-year old girls studying in a spy school and it reminds of Hogwarts and Harry Potter.

My review: if you have nothing better to do, you can read it to pass the time. It's like Sweet Valley High all over again for me. But not in a bad way. I am just too old for this and I cannot suspend my disbelief that much.
No comments:

I just found out that it is not good to watch the series before reading the book. I have completely lost my interest in reading the Southern Vampire series because I am also watching the HBO series, True Blood. Truth be told, I am not even done with the first 50 pages of the book. But I am only on the 3rd episode of the series. In other words, I am not convinced with the story.

Maybe it has something to do with having read the Twilight series first. I already have pre-conceived ideas on how vampires are. From the Twilight books, I have always imagined that they are good looking and nice people( well maybe just the Cullens). Whereas in True Blood, Bill the vampire is not that good looking. Okay, Edward is seventeen and Bill is like thirty three, but still. And Sookie Stackhouse is nothing like Bella. I sometimes find her stupid and too strong willed for her own good, while I sometimes think Bella just couldn't help it. And the vampire in True Blood has an appetite for revenge. He even killed Sookie's uncle who is very old, for having touched Sookie inappropriately years ago. Edward wouldn't do that and Bella will never asked him to do it. Not that Sookie told Bill to. But still.

Maybe, if I haven't watched the series before I discovered the books, I wouldn't lose that much interest in the story. When I read books, I always imagine how the characters would look like, and having seen how Bill and Sookie look in True Blood, the story doesn't have that much appeal anymore.

But this is not just true for Twilight and True Blood. Even for the Jason Bourne series and books by John Grisham, I have read the book before the movies came out and I enjoyed them because I was not disappointed with the movie characters. They are sometimes, how I imagine them to be. For the Dan Brown series however, I enjoyed the book immensely, but the movies were ho-hum for me. Tom Hanks just didn't fit the character in my mind. In he Harry Potter series, I have read the books long before they were movies and Daniel Radcliffe is okay as Harry.

What about you, do you enjoy a book after watching it first?
3 comments: 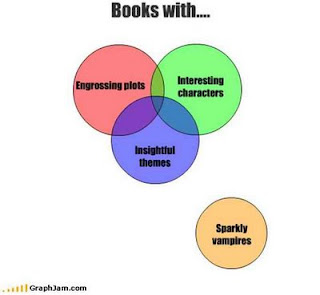 The graph is cool!

Yes, I am a vampire lover. I loved Twilight and now I will start to read The Southern Vampire Mysteries by Charlaine Harris which is the inspiration for the HBO Original Series, True Blood. It also now known as the Sookie Stackhouse books. I saw the first episode of True Blood, and it was very boring so I took to the books instead.

I will let you know how it goes after I have read the first book, Dead Until Dark.