The Avengers: Must Watch Movie!

Thanks to Nuffnang and PLDY myDSL, I won free tickets and my son and I were able to watch the special screening of The Avengers at Shang Cineplex last night.  I am not a big fan of the comics series and I am not that familiar with the story, but I loved it! 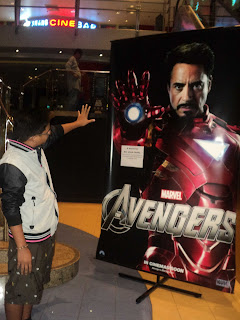 Tony Spark as Iron Man was still as good as in his own series and when asked what he was without the armor, and he replied genius, billionaire, playboy, philanthropist, that brought the house down. 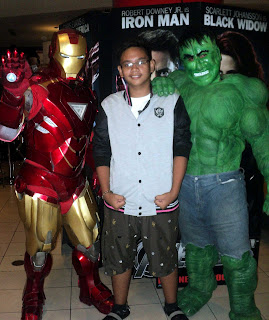 Mark Ruffalo as Bruce Banner/The Hulk did it for me.  I love Mark Ruffalo and his scruffy edgy portrayal of the man with the other man thing.  He was my ex after all, ha ha. 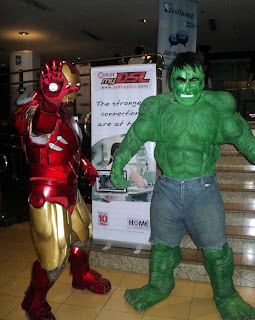 Another scene that I super loved was when The Hulk picked up a ranting Loki and threw him around like a rag doll.  The laughter in the cinema was deafening.  The movie was great nd I guess we all know that by now and if its the only movie you will watch this summer that you are set. 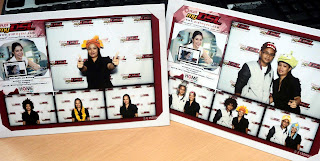 Special thanks again to Nuffnang and PLDT myDSL for the wonderful chance to watch a great movie and for the photo booth, ha ha!
No comments:

What are you reading?!?

These coming months, I would have to bid my usual reads goodbye and start seriously looking at finance and accounting books. I was  recently promoted and in the immortal words of the uncle of Spiderman, great power comes with great responsibility (not that I gained greatest powers, ha ha).  So it will be my way of being more responsible.  I will study so that words that usually just rings a bell, will now make sense to me. I am also seriously thinking of going back to school.  This will mean taking this reading thing to a whole new level! So when you go back this blog and read about my reviews on finance and accounting books, yes, its still me reading those books!
No comments:

I Can Read from My APAD! 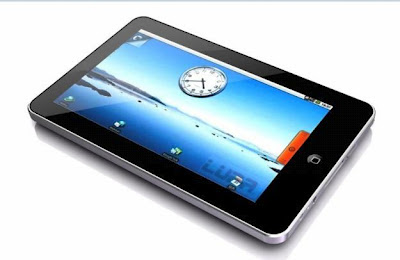 Remember that APAD that my husband gave me for my birthday last year? Well, I recently discovered that it has a built-in IReader that can function as a kindle as long as the book is in .txt format! Yes, I have been re-reading the Hunger Games trilogy, and now the Artemis Fowl books using it. The only problem is, the battery gets drained after 2 hours. Although its irritating, its actually good for my eyes to take a little rest every now and then while I charge the APAD, he he. So, while I am waiting for my Kindle to arrive, my APAD works just fine!
1 comment: 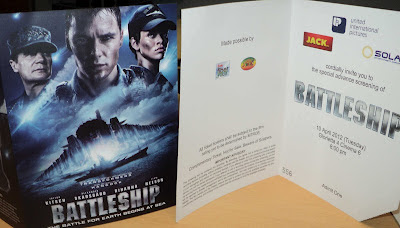 Last night, we were given free premiere tickets to the advanced screening of the movie, Battleship. Though it was past 6pm when I got the invitation from my officemate, my husband immediately agreed to go to Glorietta 4. We also invited our friends Ehms and Paul, and they traveled by motorcycle from Malinta, Valenzuela to Makati in less than 45 minutes just to see this movie! And wow, it was worth it! 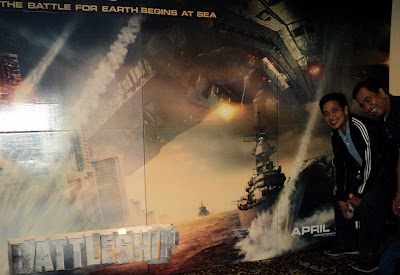 The plot is simple: we sent a signal to outer space to a planet called G, which resembled Earth in its distance from the distance and could have some forms of life. And as a response, they sent back 5 ships, 4 of which landed in the Pacific Ocean where the US Navy was having its war games exercises. One ship crash landed in Hong Kong where more than a thousand people were killed and that ship turned out to be their communications ship. Then one of the US Army ships went and checked the ships that landed on the sea, a wall of force field separated the three ships from the rest. All of these ships were destroyed in the process. The battleship, the USS Missouri landed the final blow to the enemy and when the force field collapsed, the fighter jets finished them off and the satellite which the aliens were trying to use to communicate back home. 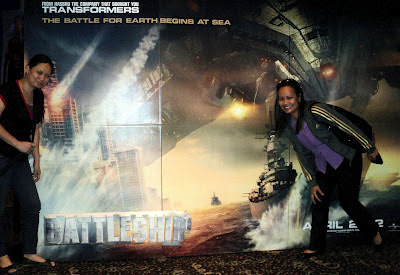 We thoroughly enjoyed the movie because there were lots of references, whether intentional or not to other movies. Sam Shane looked like Megan Fox from Transformers. The ships that can transform into something else were from the Transformers. The aliens were like Bioman and Iron Man! The army man Mick, with his artificial legs looks like Mike Tyson and he did punch the alien on the face! The maneuver they did with the USS Missouri was like a scene from Pirates of the Caribbean and Tokyo drifting. There were lots of light moments with Alex Hopper and the Nagato and their reference to the Art of War. I specially liked the chicken burrito scene when Alex met Shane. My other favorite scene was when Alex and Nagato fought and when caught, they said he slipped and I slipped and their heads just kept banging. So funny! Ordy also looked a lot like Matt Damon, but way funnier, and there was Rihanna also. She was so tiny yet she reminded me of a tough Michelle Rodriguez. All in all, the movie was fun and action packed. I was with great friends who enjoyed themselves because they liked the movie and we had fun. I gave this movie a 4 out of 5.

Special thanks to my friend Blanda and her husband Bobot and to Solar Entertainment, JACK TV, United International Pictures and the sponsors Oishi and Jamaican Patties for the free food samples!